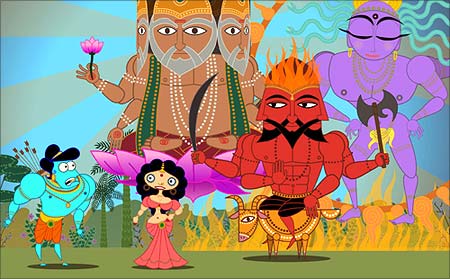 Want to provide some divine intervention?

All is well, but there is a vital issue. Paley's print is in digital format, and she needs a 35mm print for the festival. Now, she is trying to raise $20,000, and she needs every animation fan to support her.

You can donate money at this link.

The film has been a collaborative effort. 'Most films are financed by big corporations, perpetuating the top-down model of American entertainment: they dictate content from above, and audiences consume what they're handed below, Nina writes on her site. 'But Sita seems to be funded by viewers, individual human beings who want to see it get out there. The audience is financing this film! It's not just touching, it's thrilling to be part of this. Thank you!!'

Everyone who donates gets their name in the film's credits. As for donors of $1,000 or more, they get to choose the exact credit they get -- quite cool, considering your name (as Official Stud or Resident Siren or whatever you pick) will be scrolled down at the Berlinale. Wow.